[adsforwp id=”3715″]
Electronics is the branch of science that deals with the study of the flow of electrons and their effects in a vacuum, gases, and semiconductor materials.

Electronics deals with electrical circuits that involve active and passive components such as vacuum tubes, transistors, diodes, integrated circuits, and sensors. Commonly, electronic devices contain circuitry consisting of active semiconductors with passive elements; such type of circuit is known as the electronic circuit. Some of the basic terminologies in Electronics are explained below:

3. Alternative Current (AC): The flow of electrons in both positive and negative direction is known as AC.  The Sinusoidal signal carrying the amount of current and voltage is known as the AC signal.

5. Voltage: The measurement unit of Voltage is Volts, Milivolts mV, Microvolts μV, nanovolts nV. The Symbol of Voltage is U, V or E. Basically, Voltage is the “pressure” of electrons, or “electromotive force” (hence the old term E).

6. Current: Current is the flow of electrons in a unit time. The Standard Unit of current is  Ampere (Amps), Symbol of Current is I.  The amount of current in any wire or source is determined by available voltage, and the resistance of the material. Current can be AC or DC, Positive and negative, depending on the reference of current. In a conventional battery, no amount of current flows until the load is connected (I=V/R).

For electronics device, current is usually measured in mA (Milliamps), and Nanoamps (nA).

7. Frequency: Frequency is measured in Hertz and it is represented by Symbol Hz. Frequency describes the number of waves that pass a fixed place in a given amount of time. The frequency range of the audio signal is from 20Hz to 20,000Hz.

8. Resistance: Resistance is the measure of how hard electrons will flow through a device.

For example, the Copper wire has very low resistance whereas Insulator such as Plastic, Wood, etc have very high resistance. It is measured in Ohm and it is represented by Symbol is R or Ω. Resistors can be calculated through Ohm’s law (R=V/I). 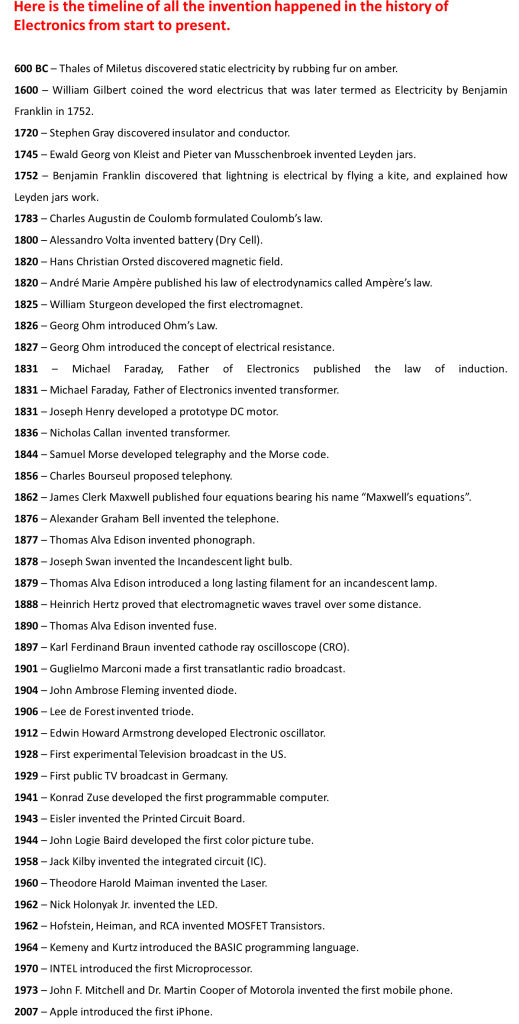 Difference between Electrical and Electronics

Difference between Electrical and Electronics can be easily understood by their working and operation.

Electrical and Electronics might sound similar, however, they’re very different. Both operate on electricity to power on useful products and machines, but that is where the similarity ends.

The devices which change current into other forms of energy or work (Heat, Sound, or light) such type of devices is known as the electrical devices.

The devices which manipulate the flow of electrons in such a way that it can perform a particular task such type of devices is known as the electronic devices.

Today with advancement in electronics engineering application in the field of aerospace has open many impossible ways to humans. Most of the parts used in the Space shuttle, Satellite power supplies, aircraft power management, and other communication instruments are electronics devices. Even in commercial airlines, there are numerous electronic devices which are used to measure different physical parameters like humidity, temperature, pressure, elevation, etc.

With the advancement of the electronics field, and particularly that of computer technology has made possible many of the application which made possible for nurses and doctors to examine his patient. Many machines like NMR, ECE, x-ray, etc use electronics. There is noticeable advancement of electronics in the field of medical sciences. There are a few mindblowing innovations which prove how important is electronics – Robotic Arm, Robotic Check-Ups, Bionic Eye, Needle-Free Diabetes Care, etc.
[adsforwp id=”3715″] Electronics are used in road vehicles, such as Lighting system of the car, telematics, in-car sound systems, etc. Initially, electronics were used to in cars to control engines. Nowadays almost every things are controlled using electronics whether it’s a chair in car or speed limitation in car, or Gas management in the car. Now electronic with its advancement, it is used in following parts of cars Electronics has proved to be the biggest problem solver in the agriculture field. Today number of electronics devices and sensors are used to monitor a crop or enhance the production of Agriculture. Like e-Agri Sensors and other electronic gadgets which are used for measuring the salinity of soil, moisture level, and nutrition level in the soil.
[adsforwp id=”3715″] Electronic sensors and devices are used to allow friendly forces to operate in the virtual environment. it is very useful we can play games such as Need for speed, PUBG, GTA,  Prince of Persia, Counter-Strike.

Electronics applications are widely utilized in Arc and Industrial furnaces such as blowers, fans, pumps and compressors, industrial lasers, transformer tap changers, rolling mills, textile mills, excavators, cement mills, welding.  Nowadays most of the firms use robotics technology Such as in the manufacturing of cars. Also write your thoughts and question related to What is Electronics, History of Electronics and Difference between Electrical and Electronics.